150 years ago today: Nerves are on edge… are the Rebels coming? 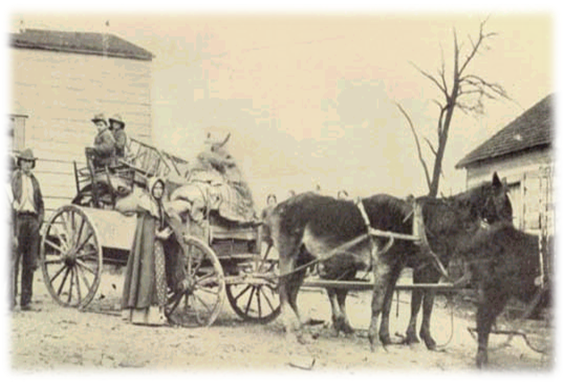 On Thursday, June 25, 1863, the gravel turnpike from Gettysburg through York to Wrightsville became a highway to perceived safety for what has been described as thousands of terrified  refugees from Franklin County and to a lesser extent Adams County.

Men, women, children, horses, cattle, mules — using wagons, carriages, buggies, carts, and all sorts of conveyances — all headed east to try to place the Susquehanna River between them and the oncoming Rebels. Inside the taverns and roadside inns along the way, weary travelers paused for refreshment and some food while regaling the proprietors and patrons with stories of alleged Confederate atrocities in the Cumberland Valley. Horses were missing by the hundreds; railroad bridges and buildings put to the torch; citizens at times openly robbed of their watches and hats; and general stores stripped clean leaving the shopkeepers with nothing to show for their inventory but fistfuls of worthless Confederate money.

At times the stories were wildly exaggerated, with tales that the Rebels would eat the babies or burn down entire towns. They collectively struck fear into the hearts of many observers, and soon many York Countians joined in the exodus.

The tide of refugees would intensify on June 26. A reporter in downtown York for the New York Tribune penned:

“Since early morning there has been a continual ingress and egress of people from Adams and Cumberland counties, fleeing with all that is dear and valuable to them. The streets are lined with wagons, carriages, carts, drays, and vehicles of every shape and design. Some loaded with grain, farming machinery and tools; others with household goods, store goods, and in fact all that are valuable and movable. Following these come other vehicles filled with women and children, whose wan and timid faces it is pitiful to behold. Then come men and boys driving before them droves of horses or of cows and sheep. All are hurrying away, before the dreaded enemy, from their once peaceful homes; and many left rich farms with ripening crops to be trampled down by the foot of the invader who will probably find little else to destroy.”

No one quite knew what the Rebels intended.

Some York Countians departed for Harrisburg or Columbia, paying the tolls or buying train tickets.

Other stayed put, deciding that the Rebels surely would not visit their neighborhoods or perhaps they trusted a golden ticket they had recently purchased from strangers from New York City who had went door to door selling promises of protection from Rebel intrusion.

At nightfall on June 25, no one could foresee how terrible the next week would be for York County, or even more terrifying and horrific for their neighbors to the west in Adams County.

The Rebels are coming.

The Rebels are coming.