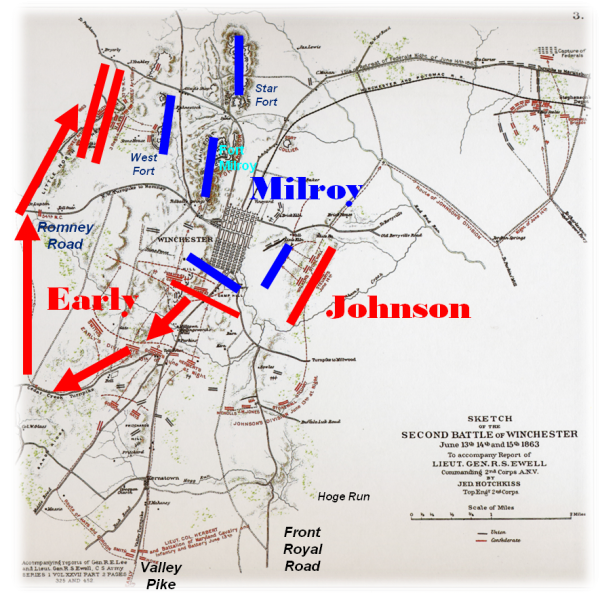 The men and officers of the 87th Pennsylvania spent a restless night on June 13-14 in the entrenchments and rifle pits near Winchester, Virginia. They had been reunited with the survivors of the two companies which had been detached at Bunker Hill, WV, but all knew that the fighting today on Sunday the 14th would be the worst they had yet experienced.

Unfortunately, the next two days would see the near destruction of the 87th. It would be part of a chain of events which 2 weeks later would see Confederate soldiers marching through the streets of Gettysburg and York wearing knapsacks stenciled with “87th Penna.,” followed by many of the ambulances of the regiment. That disheartening sight would spark anguish from the relatives and loved ones of the men of the 87th, many of whose individual fates were unknown to the residents.

For now, as the early morning mists arose over Winchester, no one in the 87th’s ranks could envision that the Rebels across the way would ever enter York.  The attention and focus was squarely on making it through this day, as Maj. Gen. Robert H. Milroy had decided to stand and fight at Winchester, ignoring pleas from his commanders and from the President of the United States to withdraw while there still was time. 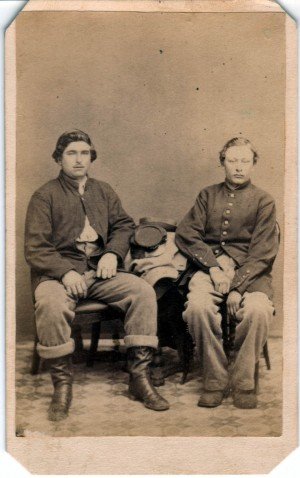 This CDV from the collection of Chris Buckingham shows two unidentified privates from the 87th Pennsylvania. These men may have been in the ranks at Second Winchester.

Confederate forces south and southwest of Winchester moved early in the morning toward the town, seizing positions that Milroy had abandoned during the night including the commanding Bowers Hill.  It had been a very wet night, punctuated by severe rainstorms.

“What an uncomfortable time we had;” the 87th Pennsylvania’s Lt. Col. James A. Stahle lamented, “no sleep, nor rest, for two days, rations getting short, everybody wet to the skin, all ready for immediate action, with the outlook anything but assuring.” He went on to question, “We knew we were being surrounded on all sides, that rebel pickets were out on every road, is it any wonder that men became despondent and lost heart. They began to ask each other, why did Gen. Milroy remain here when on Friday night we could have escaped and joined the little force at Harper’s Ferry, and behind the works on Bolivar and Maryland Heights, had some chance of holding in check for a time this host that were evidently moving toward the rich lands of our grand old state?” (Stahle Papers, USAHEC, Carlisle) 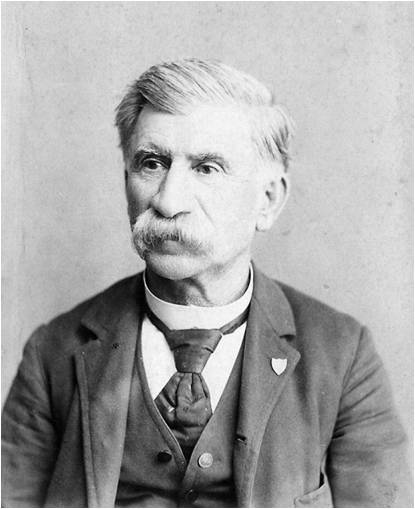 James A. Stahle after the war was a Republican congressman from York County

Fighting erupted in the streets of Winchester as the Confederates pushed toward the town. Corporal Charles Z. Denues of the 87th Pennsylvania was disappointed, because he had “looked forward to going to church, that day being Sunday, but about nine o’clock the enemy drove our men out of Winchester.” Instead he and his comrades silently filed into column and headed into town to thwart the incursion of Major Goldsborough’s Maryland Rebels. The 87th’s Col. John W. Schall mentioned, “About 9 a.m. my regiment marched down to Winchester, half a mile away, to drive out the enemy’s skirmishers who had entered the town on the south side. We had some brisk encounters with the enemy on Market, Main and Braddock streets, and succeeded in driving them out of town.”

Lt. Colonel James A. Stahle claimed, “One the way through the streets our men were fired at from the windows and roofs of houses and some difficulty was experienced in preventing them from burning the place.” Corporal John Ziegler wrote, “While on the skirmish line, I found a wounded soldier from an Ohio regiment, in danger of bleeding to death. I tied up his wound, and stopped the flow of blood. Then I went back to Winchester, secured a stretcher, and with a detail of four men, took him to the hospital, thus saving his life.” (Philadelphia Inquirer, July 4, 1897; Prowell, History of the 87th Pennsylvania, 72, 85; Stahle Papers, USAHEC)

By late afternoon, the situation seemingly had stabilized. Little did the beleaguered Union Eighth Corps defenders know that the real problem would be the next 24 hours. Many of the men questioned their commander’s decision to stay and fight against overwhelming odds.

As a countermeasure against the threat to the south, Milroy repositioned some of his men including the 87th. “We retreated to the rifle pits and then a flag of truce came from the other side, the bearers asking General Milroy to surrender,” wrote Cpl. Charles Zinn Denues. “That officer replied that he would fight until the freezing over of a future place of punishment and when that place froze over he would slide away on the ice.” The Keystoners gave Milroy “a great cheer,” and with renewed confidence managed to hold their position and drive back a Rebel attack. (Philadelphia Inquirer, July 4, 1897) 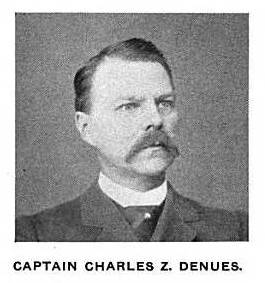 “We relieved the 67th Pennsylvania about 4 o’clock in the evening,” the 87th’s Colonel Schall reported, “but soon returned to the large fort. An hour later I received an order to move my regiment to the Star fort, but while on our way there I was directed to support the 116th Ohio Infantry, which was stationed in the direction of the battery, and a little to the right of it.”

However, throughout the afternoon Confederate Maj. Gen. Jubal Early had secretly pushed 3/4 of his 6,000-man division on a wide flanking march west of Winchester and had hidden them on a wooded ridge. He had brought up his artillery, and in the early evening opened fire causing chaos in the Union lines. No one expected an attack from that direction, as all eyes were focused on the threat from the south.

After the cannonade softened the Federal defenses, General Early sent forward the Louisiana Tigers. They crossed more than a mile of open grounds toward another ridge housing the West Fort and an associated artillery position. Whooping and yelling, the Tigers easily cleared the position. Early brought up his reinforcements and advanced his artillery, which began dueling with Milroy’s heavy guns in Fort Milroy and the Star Fort.

When Milroy realized the Rebels were overrunning the West Fort, he quickly ordered the 87th Pennsylvania to retake it. However, it was too late to save the guns or their beleaguered defenders. “I received orders from Milroy to move directly forward in support of Battery L,” Colonel Schall recalled, “which was now opened upon by a terrific fire from the Confederate artillery. The battery was captured and its support, the 110th Ohio, was falling back.”[1]

Corporal Denues recalled that the 87th “advanced boldly until our skirmishers reached the top of the hill, when they halted and we hugged the ground as we made the horrible discovery that the enemy was there ready to wipe us out of existence.” According to Cpl. John Keses, a 40-year-old Prussian immigrant and former whipmaker, “…when we came to the top of the hill we discovered that it was solid full of Confederates and some seven lines of battle behind the fort in reserve so we acted on the maxim that ‘discretion Our regiment received order[s] to retake it, is the better part of valor’ and retreated, but had there not been a steep decline there would not have been many of the boys to tell the story.”[2]

“I was then directed to take my regiment into the Main fort,” Colonel Schall added, “where it was placed in position in the surrounding rifle pit.” He went on to say, “During this contest General Milroy ascended to the top of the lookout, and with remarkable coolness and bravery, exposed to the greatest danger, took observation of the enemy, concentrating in front of him while solid shot were whizzing by him, and large shells bursting in all directions around him. He then massed all his troops in the two forts, which were near each other, and in the rifle pits in front of them.”[3]

By nightfall, the fighting had devolved into a long-range artillery duel. The 87th, now huddled inside Fort Milroy, settled down for what proved to be a very short night’s rest. For little did they know that General Milroy planned to abandon Winchester and make a night march toward Harper’s Ferry, a move which might have worked 2 days earlier.

Now, it was too late.