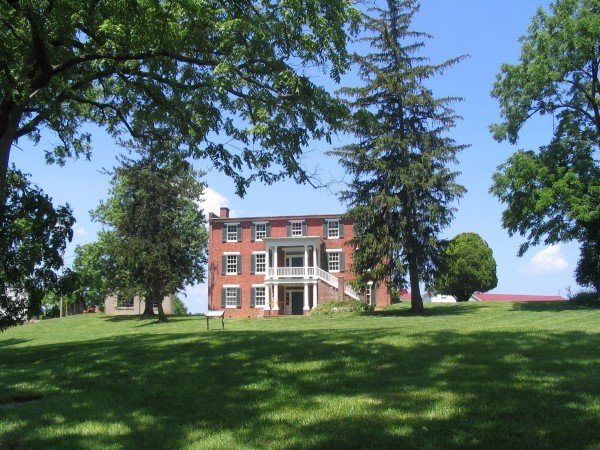 The impressive 3-story Pritchard home sits atop a high hill near Kernstown, Virginia, just south of Winchester. Fighting swirled around this property in the battle of Kernstown, as well as at Second Winchester. Not far from here, the 87th Pennsylvania (raised in York and Adams counties) contested the advance of Richard Ewell’s Confederate Second Corps. Part of the 87th manned the defenses of Winchester; the rest were assigned to defend Bunker Hill, West Virginia.

Ewell had left camp near Fredericksburg, Virginia, the first week of June and marched into the Shenandoah Valley a week later. In order to march north to the Potomac River, Ewell needed to neutralize the Union garrisons at Winchester and other nearby towns. The 87th was among the Union troops of the Eighth Army Corps which were charged with protecting the road network. They were part of the brigade of Brig. Gen. Washington L. Elliott.

On parallel paths, two of Ewell’s divisions (under Jubal Early and Edward Johnson respectively) approached Winchester from the south. Early’s men attacked Union forces on Pritchard’s Hill and the nearby Sandy Ridge while Johnson focused his attention on Federals defending the Front Royal Pike.

Most of the men of the 87th had seen their first combat the previous day farther south near Middletown, Va., and had emerged victorious.

Today would be a different story, as would the rest of the week.

Today would be tragic as the regiment would lose its first soldiers in combat.

The 87th was split into two groups, one at Bunker Hill,West Virginia, and one near Winchester. The latter force that day would lose its first soldier when an 18-year-old drummer named Daniel H. Karnes, a Philadelphia native who had enlisted in Adams County, died in action. 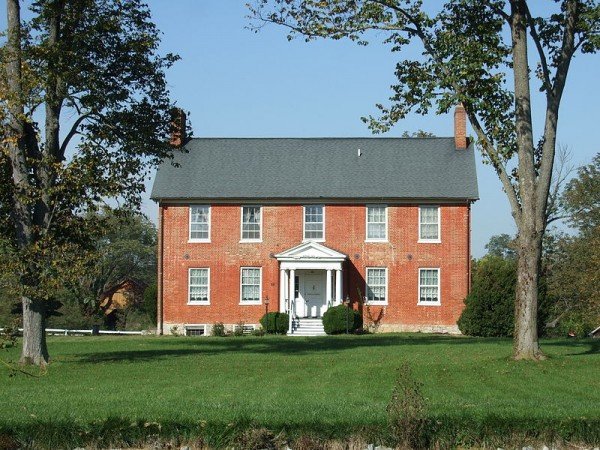 The historic Edgewood Manor (a.k.a. the John Boyd House, built in 1839) at Bunker Hill was close to the June 13, 1863, battlefield. Later in the Gettysburg Campaign, Confederate general J. Johnston Pettigrew of North Carolina expired on July 17 in this home from wounds suffered during Lee’s retreat through Falling Waters.

Here is Pvt. Jacob Herr‘s account of the late afternoon firefight at Bunker Hill. Two companies from the 87th (G and H) and two from the 116th Ohio (A and I) held positions east of the town. They were under the command of Ohio Maj. William T. Morris. Confederates from Brig. Gen. Albert G. Jenkins’ brigade of western Virginia mounted infantry and cavalry soon approached.

“13th June 1863 – This afternoon about four Oclock, our pickets were driven in by the rebels.  Our little band of veterans were amediately drawn up in line to receive them.  But they came to slow for us.  We went half way but then it commenced.  Our line was as follows:  Co. G. A. I. and H. was on the exstream left. We numbered about two hundred fifty men, while the rebs had 1500 strong all mounted infantry.  We fought them about one & a half hour in the open field, then we fell back to the churches which we had prepared for that purpose.  There we kept them at bay.  There was a heavy fire kept up until it was to dark for us to see.  As far as I know the killed and wounded are as follows:  Samuel Meginly killed.  Lt. M. S. Slothower, Corp. J. T. Henry, B. S. Kaufman & J. Landen wounded out of Co. H. Frank Welsh wound Co. G and one capt. out of the Ohio wounded.”

This brief excerpt is from a manuscript I am writing with Eric J. Wittenberg on the Second Battle of Winchester.

An officer in the 116th Ohio later recounted the desperate struggle of “the little command under its intrepid leader, Major Morris,” as it made a “gallant stand” against what he deemed as vastly superior numbers. Morris, realizing the hopelessness of remaining exposed in the fields, quickly withdrew his remnants into the fortified churches near the Martinsburg Pike. Only a little more than half his beleaguered force would make it. As the 87th Pennsylvanians fell back, Lt. Henry Morningstar of Company G narrowly escaped capture. While jumping over a brush-choked fence, the scabbard of his so-called “Sword of Bunker Hill” became entangled. The accident retarded his movements, but the father of five managed to extricate himself before the Rebels arrived. Other Keystone soldiers were far less fortunate. Lt. Michael S. Slothower and Cpl. Joseph T. Henry of Company H sustained major wounds which later proved mortal. Another captive was Sgt. Major Joseph F. Welsh, who suffered a severe injury to his left thigh while on the skirmish line. Friends carried the wounded man to a nearby farmhouse where they had to leave him to the Rebels’ mercy. Another local family, that of a Confederate sergeant, took in an injured Sgt. John M. Griffith who fell in their yard; they would mercifully hide him for a month despite their own loyalties.[1]

Michael S. Slothower was the first officer of the 87th to be killed in combat in the Civil War. He would not be the last. The 24-year-old bachelor from Washington Township in northwestern York County had been a laborer before the war. He had enrolled in downtown York in August 1861 and had twice been promoted, reaching the rank of second lieutenant at the time of his death. He was initially buried at Bunker Hill but was later re-interred in the Winchester National Cemetery in grave #1062, according to regimental researcher Dennis W. Brandt.

Slothower’s first cousin, Orderly Sgt. Andrew Bentz Smith, and several other members of the 87th would be taken as prisoners of war at Bunker Hill.