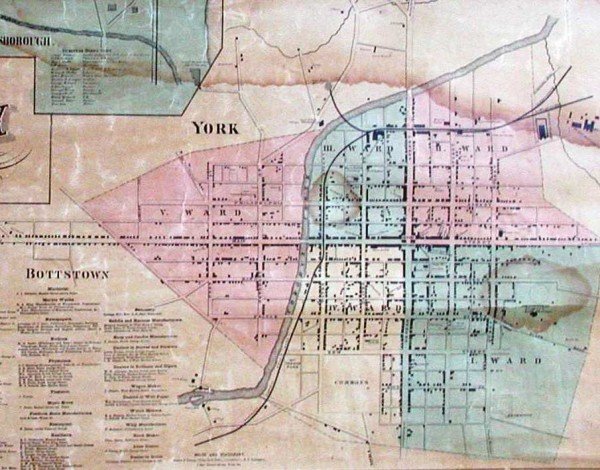 This excerpt from the 1860 Shearer & Lake map of York County, Pennsylvania, shows the extent of downtown York at the start of the American Civil War. (The image of the old map is courtesy of the Pennsylvania State Archives).

York was the largest town on the highway between Harrisburg and Baltimore, boasting some 8,600 people. The town cast more votes for the various Democrats in the 1860 presidential election than for Abraham Lincoln, and had a Democratic chief burgess, David Small, who also operated the town’s most prominent newspaper (a forerunner of today’s York Daily Record). It had a major U.S. Army Hospital (the closest permanent army facility to Gettysburg) and an army training facility at the old fairgrounds.

And now, on June 29, 1863, residents arose to a town firmly in the grasp of Confederate Major General Jubal Early. He had ringed the town with artillery, with guns pointing from what is now called Reservoir Hill (then Shunk’s Hill) south of town and from Diehl’s Hill north of town. Another battery camped at the fairgrounds in Camp Scott. North Carolinians camped at the army hospital, fairgrounds, and in the twin market sheds in Center Square.

Early kept the famed (and much feared) Louisiana Tigers outside of town; their main campsite was where today’s Harley Davidson factory is located. Virginia troops under the very charismatic and controversial William “Extra Billy” Smith lined what is now N. George Street between North York and Emigsville, with Virginia cavalry well east of York near what is today the Elmwood Mansion and Memorial Hospital.

Monday, June 29, would prove to be a long day for York residents. Some mingled with the Rebels, curious to see the artillery, limbers, portable forges, and caissons parked at the fairgrounds. Others avoided any contact and stayed indoors. A few Confederate officers gave impromptu speeches. One unnamed North Carolinian held court on a sidewalk for quite some time to the amusement of onlookers.

Soldiers shopped in the town’s stores, most often leaving the chagrined and often angry shopkeepers with fistfuls of worthless Confederate money. In a couple of cases, near riots had broken out on Sunday when Southerners broke into locked stores and began carting things out. Monday by most accounts was tamer, as General Early seemed to better control his men, and the merchants reluctantly obeyed an order to remain open.

Cobblers such as George Munchel were very busy making shoes and boots for anxious soldiers, many of which had worn out the soles of their footwear from the hard packed gravel turnpikes of recent marches from Franklin and then Adams counties.

Early’s quartermasters were busy collecting supplies such as flour, transporting them the various campsites, and distributing portions to each soldier.

In the late afternoon another parade of Rebels passed through York, this time entering from the east. James Gall of the U. S. Sanitary Commission witnessed Brigadier General John B. Gordon’s Georgians’ second passage through York. Gall noted, “About four P.M., Gordon’s brigade returned from Wrightsville, bringing with them some horses and cattle which they had picked up on the way. They had about eight supply and ammunition wagons, and twelve ambulances with them. Many of the latter were marked U.S. The ambulances were all filled with men, who had apparently given out on the way.” Many of these men suffered from bleeding feet as their shoes had totally given way on the march back from Wrightsville after their unsuccessful attempt to seize the Columbia Bridge.

Not long afterward, a courier with an escort of cavalrymen, trotted down the Carlisle Pike through Dover into York. They delivered a message to General Early from his superior officer that Robert E. Lee was concentrating the army near Cashtown, and Early was to march away from York in the morning to Heidlersburg.

The courier’s noisy arrival, with all the clatter of horses and accoutrements, interrupted Early’s negotiations with town leaders as he attempted to collect additional monies toward the $100,000 tribute he had levied upon the prosperous town. Most of the cash had already been taken from the banks, and door to door collection had “only” yielded a sum of $28,610. General Early was in his typical grumpy mood and threatened to burn down the town’s railroad facilities and nearby railcar factories if he did not get the rest of his money.

Prominent York businessman P. A. Small offered a personal note for $50,000, but luckily he never had to pay as in the excitement of the courier’s message, Early busied himself the rest of the day preparing his 6,000-man division for the westward movement, which meant the Yankees were near and that battle loomed.

In the countryside surrounding York, farmers and millers to their dismay watched as Confederates raided their properties for supplies, horses, and mules. Hundreds of animals became the property of the Army of Northern Virginia, a requisition at times known to have been enforced at gunpoint.

Yes, it was truly a long day for the residents of central York County. Confederate foraging patrols ranged as far north as Dover and as far south as York Township as Early stripped the region for anything of military value. Against Lee’s orders, in a few scattered cases, soldiers vandalized empty homes and property where the owners had departed for safer areas.

It was, in the terms of York resident and letter writer Cassandra Morris Small, an event “never to be forgotten.”

And for the next few days, thousands of York Countians will pay at least one visit to Gettysburg National Military Park or to the various reenactments, battlewalks, book signings, lectures, and concerts.

Yes, Cassandra, so many current residents are making the effort to ensure that the events of the Civil War 150 years ago are never forgotten.