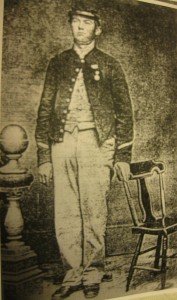 Henry Shultz was a 17-year-old teenager in eastern York County, Pennsylvania, in September 1861. He worked as a hired hand on a farm east of the borough of York near the road to Wrightsville. Like so many other young men in the region, he had read and heard of President Lincoln’s call to arms in the spring after the Rebels had bombarded Fort Sumter in Charleston Harbor down in far away South Carolina. However, he had an obligation to work the farm, especially through the summer harvest season.

Once autumn came, Henry heard that a new 3-year regiment was being formed in Adams and York counties, the 87th Pennsylvania Volunteer Infantry. He decided to enlist and become a soldier in the Union army.

However, there was the matter of his employer, not to mention his parents. At 17, he still required their consent to join the military.

Here is the story of Henry’s roundabout enlistment, as told in the recent book by Jim McClure and Scott Mingus, Civil War Voices from York County, Pa.: Remembering the Rebellion and the Gettysburg Campaign. 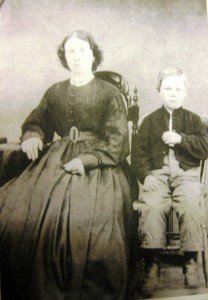 Mary Ferree Shultz posed for a portrait in the early 1850s with her young son Henry. A decade later, Henry decided he wanted to be soldier. Photos courtesy of their descendant, David F. Spangler of York County.

In September, recruiters enlisted enough men primarily from York and Adams counties to form a three-year regiment, the 87th Pennsylvania.

Seventeen-year-old Henry Shultz was among those eager volunteers.

“I worked on a farm, and they didn’t want me to go,” he later stated.

One evening, he threw his clothes into the garden and waited for an opportunity to further his getaway.

That came when those in the house tended to a sick girl staying there.

“When they went to take care of her, I sneaked out to the hay loft with my clothes and hid them under the steps,” he wrote.

He described his departure: “The next morning, I took the colt out to the pasture and kept looking into the house at the table. When I saw Mr. Baum go to the table, I watched my chance and went to the barn where I changed clothes. I jumped from the barn when no one was looking, into the corn field and came out at Kreutz Creek.”

Henry walked to York and enlisted at Penn Common.

Mr. Baum and his father wanted him to come home, and the enlistment officer asked Henry if he really wanted to go to war.

On September 25, 1861, Henry was mustered into Company G of the 87th Pennsylvania. Private Shultz fought in the Gettysburg Campaign at the Second Battle of Winchester from June 13-15, 1863, where he received a painful wound to both thighs in fighting near Carter’s Woods. The Rebels captured him, along with more than 3,000 other Union soldiers in one of the worst disasters to befall the Federal forces up to that point in the war.

Henry would later desert from Camp Parole and be arrested. He would be held into early 1864 when he was released and allowed to return to the regiment. Promoted to corporal in June 1864, Henry served through the rest of the war. He received an honorable discharge on June 29, 1865. He married, raised a large family in Spring Garden Township, and lived to be the last survivor of the 87th Pennsylvania and the third to the last Civil War veteran in York County. He died on January 20, 1940, a life that spanned the presidencies of John Tyler through Franklin Delano Roosevelt.

When Henry was a child, the U.S. was on the eve of war with Mexico. When he died, the threat was Adolph Hitler and the Nazis in Germany.

What are your stories of your ancestors in the Civil War? Send any information to scottmingus@yahoo.com. We are especially interested in copies of letters, diaries, photographs, sketches, memoirs, etc.