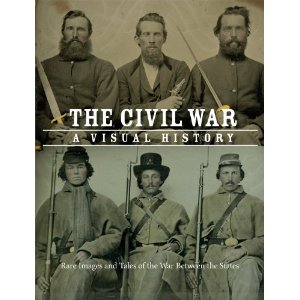 Parragon Press has issued a new book on September 27 entitled The Civil War, A Visual History: Rare Images and Tales of the War Between the States. This is not to be confused with the recent book with a similar title issued by the Smithsonian Institution. The Parragon book is a fascinating collection of vintage Civil War photographs and documents mainly culled from the vast collection of the Library of Congress, with text drawn entirely from accounts by the participants and eyewitnesses. As a “coffee table book,” this excels in its format and content, which are sure to attract both the casual history buff as well as the more experienced Civil War buff.

While some of the images are relatively common in other published works, there are scores of photos in this new book which are rarely seen and may be entirely new to the reader. Some of the pictures span two pages, giving a chance to see some interesting details in the background not available in smaller images.

The text comes from soldiers’ letters and diaries, and helps place the settings for the photographs. The selection of content is appropriate and at the right level. They help convey the emotions and feelings of the soldiers as they experience warfare and military life.

The photos are in topical order in the rough sequence of the war. Chapter 1 is entitled “The Conflict Begins,” with succeeding chapters being “Battles + Fighting To Do,” “Front Lines,” Battles + Many Brave Men,” “Behind the Scenes,” “Battles + Determined to Win,” “Home Front,” “Prisons,” “Battles + Fall of the Confederacy,” and “The Aftermath.” These are followed by photo credits and an index.

Most of these vintage photographs are from the Library of Congress, with others from the Museum of the Confederacy, the National Archives, and a few from private collections.

This book succeeds as a collection of images for a casual evening’s entertainment, or as a gift for that Civil War buff on your Christmas or birthday list. There are literally hundreds of images to peruse, and the book should be a worthy addition to your Civil War library.