100th anniversary of the Civil War inspired a generation of history buffs; will the 150th? 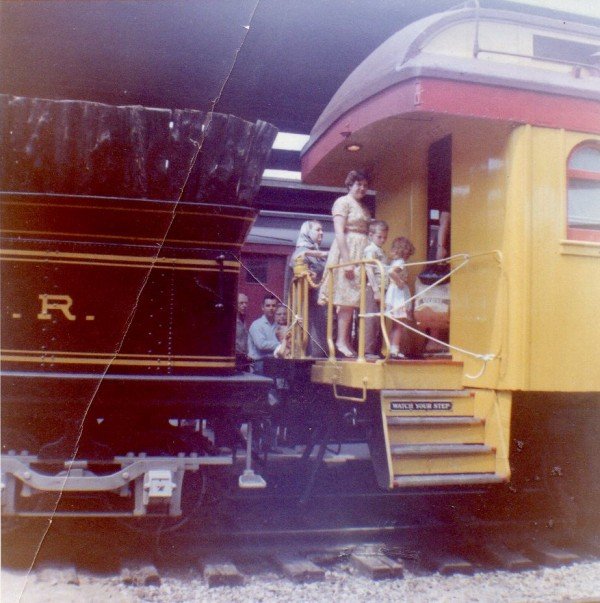 A line of tourists, including future Cannonball blogger and author Scott Mingus (with his mother and sister), await entry into a restored Civil War-era railcar during the steam locomotive the General’s visit to greater Columbus, Ohio, back in 1962. The historic train played a prominent role in “The Great Locomotive Chase,” a historic event in northern Georgia during the war’s second year which inspired a Walt Disney movie of the same name starring Fess Parker.
From 1961-1965, much of America commemorated the 100th anniversary of the Civil War. Many towns held parades and/or sham battles; politicians made speeches in front of Civil War memorials; souvenirs and trinkets abounded; Marx issued a nationally distributed set of plastic army men that most Sears and Montgomery Wards stores carried; and the war inspired a handful of films and TV shows.
Many historians today who are in their 50’s and 60’s point at the Civil War commemorative events of their childhood or youth as their inspiration for a life-time love of history. Several can cite specific events, books, or that Marx “Blue & Gray playset” as providing the spark to learn more about the history of the War Between the States.
A generation later, the 125th Anniversary of the Civil War and later the Ron Maxwell movie Gettysburg helped inspire another wave of history buffs, as well as professional historians and authors.
Will the 150th do the same?
Only time will tell. 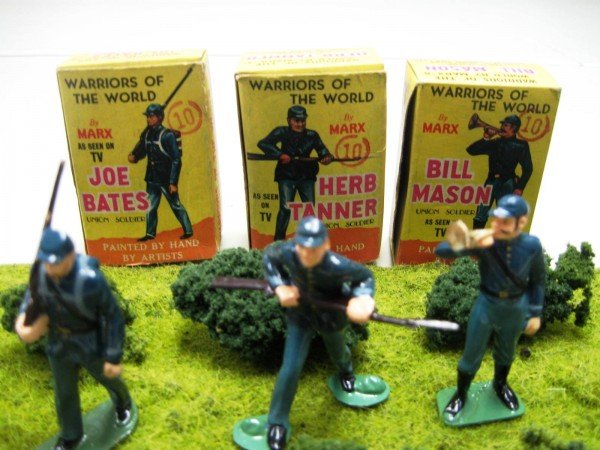 Back during the 100th Anniversary of the Civil War, Marx also manufactured a very popular line of ten-cent soldiers, the Warriors of the World Series, which featured 54mm scale soldiers from a variety of wars throughout history, including the Civil War.
As the 150th anniversary of the Battle of Gettysburg approaches, so does the excitement level here in south-central Pennsylvania.
A new Steam into History attraction has brought a working replica of a Civil War passenger train into York County as am added attraction, one which may inspire some child to later become a history professor or school teacher or writer.
Plans are in place to light up the Susquehanna River with cauldrons of fire atop the old piers of what was once among the world’s longest covered bridges between Wrightsville and Columbia. Perhaps some of the young spectators will again view the reflections of the flames flickering in the dark river and gain an excitement for the love of history and the respect for what happened to shape our country.
Hundreds, if not thousands, of children over the next year will walk through the York County Heritage Trust’s museum at 250 E. Market Street and gaze at the artifcats and get absorbed (hopefully) in the interactive displays.
Seminars, speeches, new books, living history encampments, concerts, plays, reenactments — all are planned for the next 2 weeks in Adams and York counties. Some events will draw thousands; others a mere handful. Yet, done correctly, they can be the same kind of inspiration as the 100th was to my generation.
And yet, there’s so much more which could have been done here in York County.  Political speeches and a wreath-laying at the county’s war memorial in Penn Park. Commemorations at the Salem Square monument. A city-wide coordinated series of events. Churches holding period services on Sunday, June 30, with Civil War-themed events afterward (a handful are doing this, but not many).
A lack of appropriate volunteers can be blamed in many cases. In others, it’s a lack of funding, or perhaps the lack of a champion willing to take the reins and run with the ideas. Perhaps a lack of tangible family or regional connection to the residents of the Civil War period can be blamed.
In some cases, Yorkers just want to forget; their town having been seized by the Confederate army. And yet, there is plenty to take pride in not only in the town, but throughout the county. York borough men responded and joined the army. Civilians are known to have fired at the Confederate invaders during the Battle of Hanover and the Skirmish of Wrightsville, including a civilian company of 53 black men from the river towns region. A detachment of unpaid volunteers from Wrightsville and Columbia, all in civilian clothing without military trapping, risked their lives as couriers and scouts as the Rebels approached Wrightsville. We don’t have a list of their names to even commemorate their daring and risky service.Other scouts from York and Hanover helped monitor enemy movements in their respective areas.
Women and men rose up to minister to thousands of wounded soldiers at the York U.S. Army Hospital and in the many field hospitals in Adams County and in Hanover. Food, money, time — all were sacrificed by the citizens in order to make the soldiers more comfortable or to prolong their lives, or in some cases, to ease their deaths.
Heroes abounded.
We should remember.
We must remember.
And, may the events planned here in York County over the next two weeks inspire a new generation who will carry the torch to recall this area’s rich Civil War history. May they continue the research, write the books, teach the children, preserve the buildings, collect and interpret the documents, and cherish the memories of a generation of long ago whose deeds should never be forgotten.